What is the purpose of vent filter

Why 0.2 micron vent filter is required for the autoclave??

Sterile air filters should be rated at 0.2 microns. There are many different mechanisms by which filters capture contaminates, but most people are not familiar with them (see Filtration Mechanisms below). It turns out that different-sized particles are captured using different physical mechanisms. Although seemingly counterintuitive, a filter is not necessarily better if it is rated for a smaller size particle. Generally, sterile air filters are rated at and define efficiency at 0.2 microns for a couple of reasons: 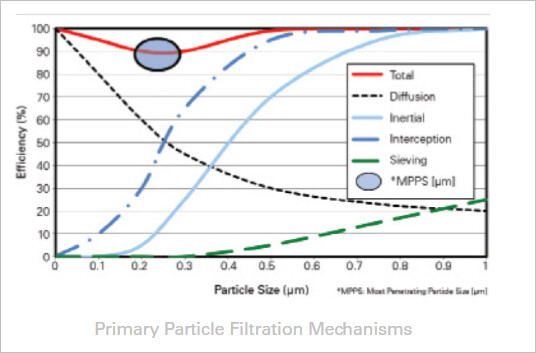 As the chart above shows, it is easy to achieve very high efficiencies of over 99.9% at 0.01-micron particle size. Even though a filter can truthfully advertise 99.9% at 0.01 microns, it is quite possible that it is significantly less efficient at 0.2 microns and allowing bacteria through to contaminate the sterile process. Before purchasing sterile air filters, ensure that your supplier provides the efficiency at 0.2 microns.
Reference:

Thanku sir… For ur valuable information…

You are always welcome.