I m asking about Sampling time. 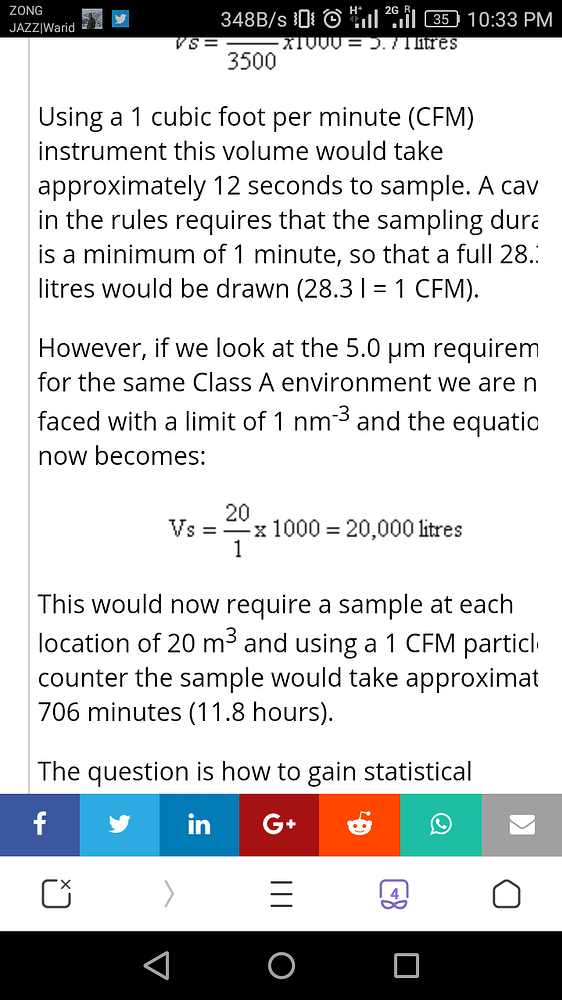 my reply was based on this equation.
now kindly explain these papers and ur ans

The particles are sampled using a selected volume of air. Because particle counters were first developed and manufactured in the U.S., the first standards developed were imperial and a sample volume of 1 cubic foot became accepted internationally as the standard volume, as it conveniently took 1 minute to complete. However, a lot of countries developed their own standards and countries in Europe used metric volumes so the 1 cubic meter sample came about. Depending on what standard is followed, the sample is taken and the concentration of particles per volume is displayed on the screen of the particle counter. Normally the size of particle is shown with the corresponding number of particles. The pharmaceutical industry is mostly interested in the reporting of two sizes: =0.5µm and =5.0µm, as these ranges contain the microorganisms that will have an adverseeffect on the sterility of the product.
This information is then recorded, printed or downloaded and the data interpreted based on the standards used. Since 1999, ISO 14644-1 has been adopted as the international standard, so that all countries follow the same guidelines and use the same parameters. In September 2003, the EC Guide to Good Manufacturing Practice Revision to Annex 1 came into operation. This has had a big impact on the pharmaceutical industry as it requires continuous sampling in Grade A/B areas and has caused confusion regarding sampling a m3 of air. Generally, 1 minute samples were taken but a 1 m3 sample would take over 35 minutes, as the flow rate on particle counters has traditionally been 1 cf/min. This has pushed current technology. One manufacturer has responded by introducing a particle counter with a, higher than normal, flow rate of 1.77 cf/min (50 L/min) which cuts the 1 m3 sampling time from 35mins to 20mins while keeping the size of the particle counter extremely small and allowing full portability.
For continuous sampling, facility monitoring systems are usually used. These systems incorporate remote sensors situated near the point of fill or where production is taking place. The sample data is then relayed to software on a PC where the operator can view the data in real time and immediately take required corrective actions. These systems are fully automated (and adhere to 21 CFR part 11), collect data continuously and have alarms built into the software so they can dramatically improve quality control anddata collection.

Apprx. 20 minutes to sample 1000litres. Time may vary with 2minutes plus minus.
Some particle counter also have provision to count fir 1 minutes i.e. 50 litres and calculate per 1000litres.

mean particle counter automitacly use multiplyni factor 20 and give reading within 1 min insted of 20.
im i right?

No u have to multiplied manually to get result.

no we do not multiply any factor like 20.after 1 min particle counter give the reading print out.

Is your particle counter take 50 liter air and give result for 1000 liter.